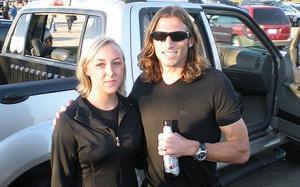 Why is he FBM’s Soccer Valentine? Hejduk represents everything that is sacred to the FBM. Patriotism, soccer, and beer. A player who tailgates with fans when he’s suspended. A player who snags a beer from the supporters section after a victory. He served his National Team with heart and dedication and won the MLS Cup twice. There very little not to love about this guy. Frankie and I…the perfect Valentines “bro-mance”.

What would their Soccer Valentine date be? We’ll head down to the bar and take in any soccer that’s on the TV and then slam brews until we both pass out.

Our straight ally The Free Beer Movement is on Twitter at @freebeermovemnt and on the web at www.thefreebeermovement.com.

If there is one thing many of the MLS Original clubs have in common, it is a history of kit design with little continuity and even less tradition.  Los Angeles shares the top spot  on this unfortunate list – alongside Kansas City – with a radical departure in design coming every year or two since their inception.

But the beginning of the Bechkam era (MLS 2.0) coincided with a league-wide push for brand identity and as a result, in the years since, the casual fan can identify the teams around the league using only the clues provided by a color swatch.

And as far as brand identity goes, Los Angeles Galaxy has led the way.  Their all-white home kit with accents of blue and gold is not only recognized by casual soccer fans the world over, but by American soccerphobes as well, an arguably bigger achievement.  On top of that, the Galaxy’s #23 jersey is one of the most-sold jerseys in the world.  In any sport.  Ever.

The Beckham-era Galaxy jersey, love it or hate it, works.

So why does the 2012 version radically depart from it?

END_OF_DOCUMENT_TOKEN_TO_BE_REPLACED

One of the great things about MLS – and one of the things that has always been great about MLS – is the fan’s accessibility to their favorite players.  These last couple of years have seen a rapid increase in players – both big-name stars and up-and-comers – take to social media to share their soccer-related thoughts as well as their day-to-day doings. It all comes together to create a product that fans not only support, but also identify with.

The Los Angeles Galaxy – arguably the biggest brand in the league – is no different.  In addition to the hard-working social media folks in the front office whose updates are dispatched morning, day and night, several LA Galaxy players share the Twitterverse with their fans.  This list of accessible players includes two Rookies of the Year and, perhaps leading by example, the team’s captain.  A sublisting of my personal favorites are after the break. END_OF_DOCUMENT_TOKEN_TO_BE_REPLACED